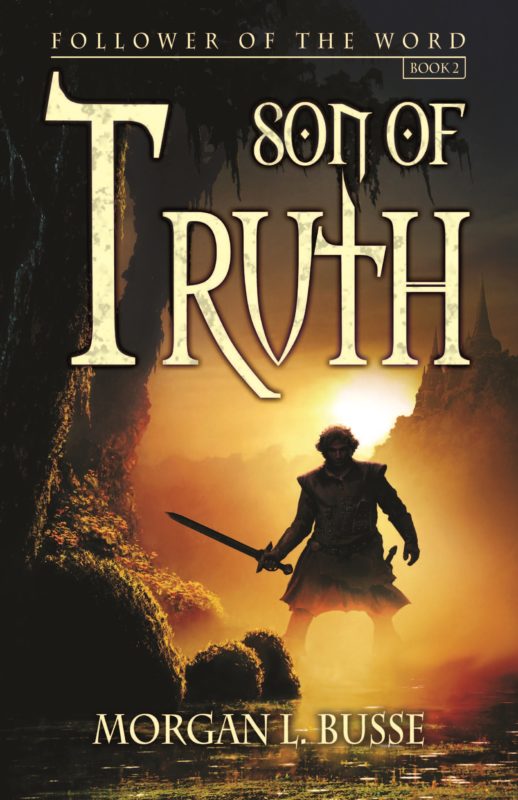 Follower of the Word book 2: Son of Truth

Can a killer find forgiveness?

The war in the north is over, but the war for all the Lands has just begun.

As the Shadonae solidify their hold on the city of Thyra, Rowen Mar, the last Eldaran and savior of the White City, awakens to find herself hunted by those she has saved.

Meanwhile, the assassin Caleb Tala finds himself in the presence of the Word. The time of reckoning has come, and he must pay the price for all the lives he has taken. But in his moment of judgment, Caleb is given a second chance to change his life.

These two hold the power to save the Lands from the Shadonae. One must escape slavery, and one must choose to forsake everything before the world is consumed in darkness.

Son of Truth is the second book in the Follower of the Word series, a Christian epic fantasy series. Morgan L. Busse is a writer by day and a mother by night. She is the author of the Follower of the Word series, The Soul Chronicles, and The Ravenwood Saga. She is a two-time Christy Award finalist and recently won both the INSPY and the Carol Award for best in Christian speculative fiction. During her spare time she enjoys playing games, taking long walks, and dreaming about her next novel.

Other Books in "Follower of the Word"

Follower of the Word book 3: Heir of Hope Follower of the Word book 1: Daughter of Light
Look Inside
Disclosure of Material Connection: Some of the links in the page above are "affiliate links." This means if you click on the link and purchase the item, I will receive an affiliate commission. I am disclosing this in accordance with the Federal Trade Commission's 16 CFR, Part 255: "Guides Concerning the Use of Endorsements and Testimonials in Advertising."