Hi everyone! Today we are interviewing our own Steve Rzasa. Steve was born and raised in South Jersey, and fell in love with books—especially science fiction novels and historical volumes—at an early age. He earned his bachelor’s degree in journalism from Boston University’s College of Communications in 2000, and then spent seven years as a reporter and assistant editor at weekly newspapers in Maine. Steve moved to Wyoming in 2007 to become the editor of a weekly newspaper there, and now works at the local library. He and his wife Carrie have two boys and live in Buffalo, Wyoming.

Steve is the author of multiple science fiction and steampunk novels including Face of the Deep series, Stark Brothers series, and Carol Award Winner Broken Sight. Please join me in welcoming Steve today!

1) When did you realize you wanted to become a writer?
From a young age. Somewhere I have stashed away a story I wrote in second or third grade about the adventures of two LEGO guys in a spaceship I built. My teacher and then my parents saved it for me. It was further cemented in high school when I completed a novel-length manuscript—which will most likely never see the light of day, because it was bad.

2) Tell us a little about your books.
I have The Face of the Deep set, consisting of The Word Reclaimed and The Word Unleashed. Those are followed by the Rescue Ops adventure Broken Sight. I also wrote a pair of steampunk novels, Crosswind and Sandstorm. All of those were published by Marcher Lord Press/now Enclave.

I also have co-written the Quantum Mortis murder mystery sci-fi series: A Man Disrupted, and the novella Gravity Kills. Most recently, my short fiction Turncoat was published in the Riding the Red Horse anthology of military sci-fi. All of those are published by Castalia House. 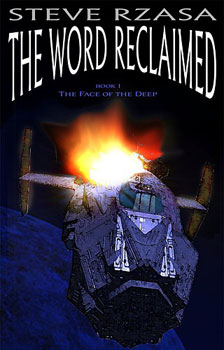 3) What was your favorite book as a teen?
My favorites were the books of the series TRIO: Rebels in the New World written by the fantastic R.A. Montgomery in 1990. It’s set in 2015 (a quarter century in the future!) in the aftermath of a global economic and political collapse. A whole generation is decimated by war, leaving the mid- to older teens as the main spies and soldiers. TRIO is about one such team of spies, and the six book adventure ends with a very sci-fi note. Lots of fun—and even more interesting to re-read as a 37-year-old who received them as a complete set for his birthday last year.

4) Describe your feelings when you opened the box and saw the first published copies of your very first book?
There was a big grin. There was elation, thankfulness, and the realization that “This is real.” I have several works published as e-books, and am glad to be able to expand my readership through those. But nothing beats the feeling of lifting the first physical copy of your first book from the box. You think it’s finished, but at the same time you lean to the future of it’s just beginning.

5) What are your hopes for your future as an author?
If I were staying humble, I would say I hope to continue to have my work published for a broader audience that would draw in all kinds of readers, from the devout Christian to the staunch atheist, to both entertain and impart the hope of God in subtle—and sometimes not so subtle—ways.

Shooting for the stars, I want a book of mine to become a movie. That would be awesome.

6) What can you tell us about any future releases you have planned?
I’ve turned over the manuscript for a fantasy novel tentatively entitled The Bloodheart to Enclave Publishing. It’s the tale of a cloudship captain in a land of floating islands who must come to grips with his re-emerging magic abilities while hunting down a relic of immense power and staying one step ahead of the king’s vicious enforcer. Took me about a year to write and was great fun to piece together, especially when it came to fleshing out the captain’s companions: his faithful dog, his first mate the were-fox warrior, and his sailmaster the crossbow-wielding winged woman.

I also have the genesis of a three or four part space opera adventure, and am tinkering with returning to The Face of the Deep series with an update on the heroes who made The Word Reclaimed (2009) and The Word Unleashed (2010) so exciting.

7) Star Wars or Star Trek?
Star Wars. While I love the exploration aspect of Trek and the graceful design of the starships by the series’ various artists, Star Wars universe feels more real. Plus, lightsabers and Jedi beat Klingons any day. But don’t get me wrong: Picard is the man.

8) Favorite place to vacation?
The Jersey shore—no, not the one from the abysmal TV show of the same name. We stay at Ocean City, New Jersey, for a week or two every summer. My parents rent a house and it’s usually the six of us, sometimes with my mother-in-law as a guest and my brother and his wife as visitors. It makes for a great time of getting our small family together in one place for a nice vacation. Plus, there’s sun, surf, and the best pizza ever. Period.

9) Do you have a favorite Bible verse?
One that I have difficulty memorizing, but I still love it in context of the story: He said to them, “Where is your faith?” And they were afraid, and they marveled, saying to one another, “Who then is this, that he commands even winds and water, and they obey him?” (Luke 8:25)

10) Do you listen to music while you write? If so what are some examples?
I almost always have my MP3 player on, with my earbuds in, because some of my best action scenes flow forth with a soundtrack. For example, as I’ve been writing a superhero novel (my latest project), I’ve had the 2003 Stone Temple Pilots album “Thank You” playing. Rocking good music for fast action and heroics.

11) How would you like to be remembered?
As a person who helped others and whose writing took people along on new adventures.

12) What is your favorite thing you have ever written?
My favorite thing I ever wrote—to date, anyway—is a novel entitled For Us Humans, which tells of an alternate present day USA in which aliens live among us. The main character is a freelance art recovery specialist who gets paired with an alien detective to find a stolen sculpture of immense value. Hijinks ensure. It’s my favorite because the main character, Caz, is irreverent, rude, funny, heroic and thoughtful, all at once.

Thank you, Steve, for joining us today! Here is where you can find Steve online: