Hi and welcome to another speculative author interview at Enclave Publishing. Today we have Robert Treskillard with us. Robert is the author of the series The Merlin Spiral. 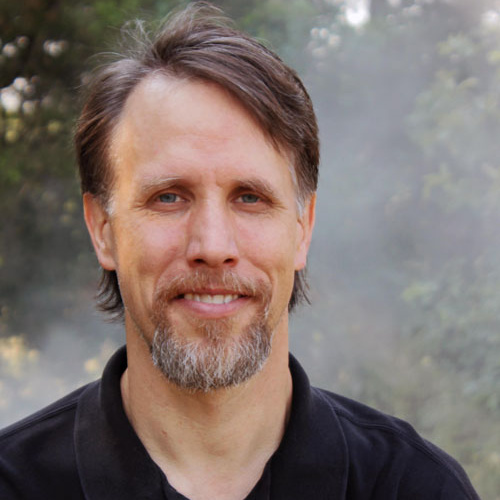 Well, not to join the crowd, but I began by being rejected by Steve Laube! I had an appointment with him at the 2008 ACFW conference, and when I subsequently submitted MERLIN’S BLADE to him, he rejected it.

But … he did give me one bit of information that greatly encouraged me: He told me that the concept for my story was publishable, and that if my writing was good, he could sell it.

Well, suffice it to say, four years and twelve drafts later I finally landed Les Stobbe as my agent, and Jacque Alberta at Blink YA Books / Zondervan became my editor.

Thank you, Steve, for the encouragement to keep perfecting my craft and story!

The eighth grade—sort of. Although I didn’t decide to become an author then, I did learn that I had some skills in creative writing because Mrs. Sitts, my English teacher, told me to send her a copy of my first book. It took me 25 years to actually begin! Sadly, I’ve lost touch with her and haven’t been able to send her a copy.

MERLIN’S BLADE: A meteorite crashes to Britain and brings a mysterious stone that enchants everyone who sees it. Merlin, who is mostly blind, is the only one immune, and he must find a way to save his family, his village, a young Arthur, and eventually all of Britain from the plots of the druids.

MERLIN’S SHADOW: Merlin travels north to save Arthur’s life from the warrior who slew the High King, but dangers multiply when the Arch Druid uses Merlin’s sister to strike him from afar. In the end, Merlin must sail to the lands of eternal darkness to cleanse the world from an ancient and powerful evil.

MERLIN’S NIGHTMARE takes place 16 years later, and Merlin is helping reclaim Arthur’s throne. But his greatest nightmare is brought to life by Mórgana when she creates an army of werewolves. Can Merlin stop her before she unleashes an even greater evil? 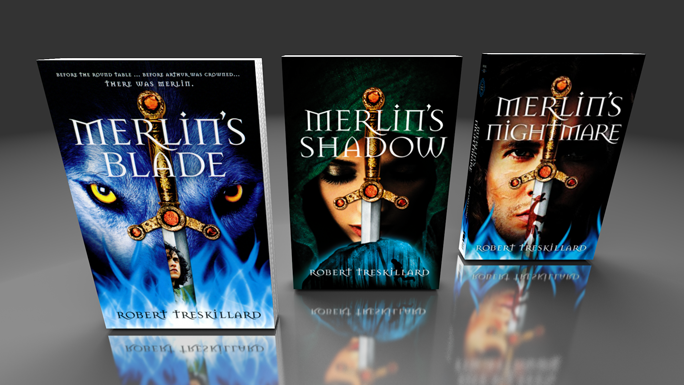 4) How do you write? What’s a normal writing day like for you?

I work a day job as a software developer, so I write early and late. My favorite place to write is sitting in my corner chair next to the wood stove. A cup of herbal tea is in my hand, and my little Bichon Frisé, Snowflake, is resting next to me.

I try to write 400 words per day, which is a fairly slow pace, but I cram a lot of history into my novels so I’m researching as I go, and that takes time.

It took seven years to reach that point, so it was quite an amazing experience. Was it real? Could it be? Yes it was. And then the reality hit … I was now under deadline for book two and three! Thankfully MERLIN’S SHADOW was already written (though it did need some polish). But Zondervan had me on a “publish every six months” schedule, so that left barely enough time to finish MERLIN’S NIGHTMARE.

6) What are your hopes for your future as an author?

My hope is to stay with Zondervan, but I won’t find out what they think of the sales until November, so who knows? Either way, I am committed to writing and publishing the next trilogy in the series, THE PENDRAGON SPIRAL, and I’m already plotting book one, tentatively titled ARTHUR’S BLADE.

7) If you could have dinner with three authors, living or dead, who would they be?

Probably Lewis and Tolkien to begin. For the third, I’ll add G. K. Chesterton because a friend just stayed with us on his way to a Chesterton conference (hello, Sam!), and I am quite convinced Chesteron would add remarkably to the discussion.

8) What were some of the challenges for you writing your book?

All the research! I spent an entire year researching before I began writing, and it’s still going strong. Just today I was researching the lyrics to an ancient Irish song to understand its age and meaning, and how I might apply it to the plot of ARTHUR’S BLADE. Every detail must be checked and re-checked, and yet I still make mistakes.

Both. But I’m old school and don’t like the newer stuff very much.

Silver Dollar City in Branson. My wife and I had our honeymoon there, and we go back as often as we’re able, and the whole family loves it.

I prefer instrumental so it doesn’t distract me, and heavily lean on Celtic music. In particular, an album named Scottish Moors has provided a great mix of mood and power for my plotting and writing. You can hear samples at the following link:

First of all, my wife Robin. Her patience, hard work, and wonderful editing has made it all possible.

Beyond that, I’d like to thank Wayne Thomas Batson, Scott Appleton, Douglas Bond, and L.B. Graham for their early endorsements and encouragement.

Robert Treskillard is a Celtic enthusiast who holds a B.A. in Biblical & Theological Studies from Bethel University, Minnesota. He has been crafting stories from his early youth, is a software developer, graphic artist, and sometime bladesmith. He and his wife have three children and are still homeschooling their youngest. They live in the country outside St. Louis, Missouri.

It all began when Robert’s son wanted to learn blacksmithing and sword-making. The two set out to learn the crafts and in the process were told by a relative that they were descended from a Cornish blacksmith.

This lit the fire of Robert’s imagination, and so welding his Celtic research to his love of the legends of King Arthur, a book was forged—Merlin’s Blade, book one of The Merlin Spiral, now published by Zondervan / BLINK Young Adult Books and available worldwide wherever books are sold.

Thank you, Robert, for joining us!