Fragments of Truth in Fantasy Fiction

We are all myth-weavers and lore-tellers. Perhaps we tell our children fantastical stories. Perhaps we spend long months and years crafting them into a manuscript. If we aren’t telling or writing them, perhaps we are the listeners or the readers, allowing the stories to come alive through our imaginations.

Tolkien argued that fantasy stories in particular evoke a deep wonder and longing in us because these stories bear truth to an underlying reality. He said, “We have come from God, and inevitably the myths woven by us, though they contain error, will also reflect a splintered fragment of the true light, the eternal truth that is with God.”

It is these ‘fragments of truth’ shining through fantasy stories that explain the universal appeal of the genre. According to Tim Keller, we are drawn to these stories because we have intuitions of the Bible’s creation-fall-redemption-restoration plotline. He says, “Even if we repress the knowledge of that plotline intellectually, we can’t not know it imaginatively, and our hearts are stirred by any stories that evoke it.”

Consider some ‘fragments of truth’ found in fantasy fiction.

How we love those epic fantasy moments when, despite the darkness, the bleakness, the seeming hopelessness, good triumphs over evil.

In the battle for Narnia, the White Witch’s forces have the upper hand. Edmund is mortally wounded and the Witch is about to deal the death blow to Peter when Aslan bounds into the battle, swooping down on the Witch and gaining the victory. (The Lion, the Witch and the Wardrobe, Lewis).

The Orcs and Uruk-hai have broken through the defences at Helms Deep. All appears lost, when Gandalf gallops in at dawn with Erkenbrand and his troops, to defeat Saruman’s army (Two Towers, Tolkien).

The Bible is full of such exhilarating, nail-biting moments, where heroes escape, evil is defeated and good restored.

Pick up the story of Yahweh’s people fleeing their harsh captivity. They are running for their lives, the enemy’s chariots closing in on them. They are cornered: all is lost. But then…a path opens ahead of them through the sea. Still the enemy thunders down on them and we hold our breaths. The water wall crashes down on the chariots, the riders are washed away, and Yahweh’s people—safe on the far shore—shout their victory (Exodus 14).

Or turn to this riveting chapter: the hero, the one on whom all our hopes rested, is dead. We watched the enemy shame him, beat him, crush and kill him. All is lost. But then…the tomb in which he was buried is empty and angels tell us he is alive. We hardly believe it, but suddenly he is standing behind us, whispering our name (John 20).

Another common ‘fragment of truth’ in fantasy stories is the seemingly weak character, chosen for a great purpose, who steps into an important destiny. The unwanted orphan boy whose very name, Pug, sounds weak, becomes the apprentice to the master magician, and changes the fate of his world (Magician, Feist). Frodo, a diminutive Hobbit (a race known for their lack of fighting skills or courage) outwits Lord Sauron and casts the ring of power into the fires of Mount Doom (The Return of the King, Tolkien).

These stories echo the truth of the biblical ones:

Read how the youngster, sold as a slave by his jealous older brothers, ends up in the king’s dark dungeon. When the king has disturbing dreams, only this young prisoner can tell him what they mean, and we watch our young hero step into his great destiny as ruler over Egypt, saving not only the nations but—rather satisfyingly—his terrified brothers (Genesis 41).

Flip to the chapters about the hot-headed fisherman who leaves his nets at the call of Jesus, the Anointed One from Nazareth. On the night of his master’s trial, the cowardly fisherman will three times deny he knows Jesus. Yet he will be restored and transformed to step into his heroic destiny as the rock on which the church is built (John 18 / Acts 2). 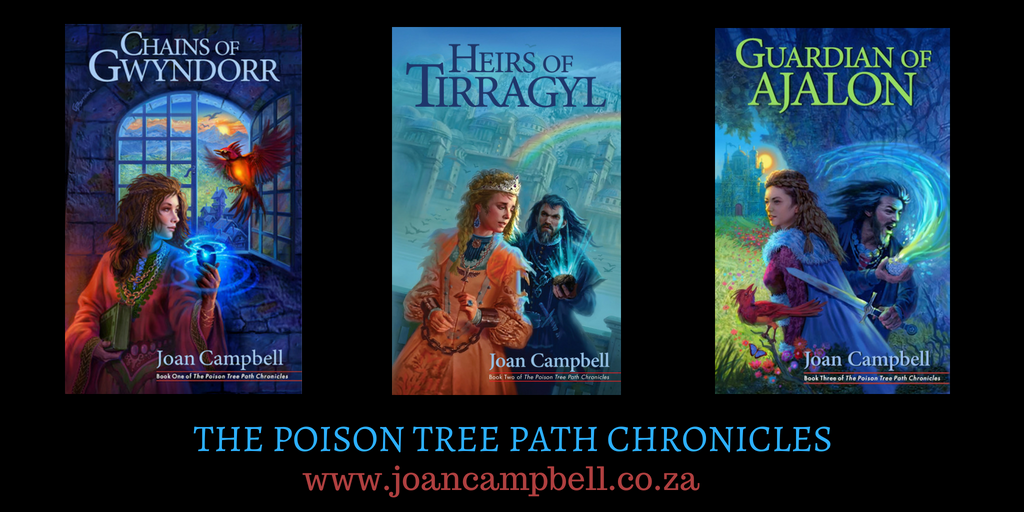 The Story All Other Stories Point To

Look closely and you will see many such ‘fragments of truth’ in fantasy fiction, reflecting the greater truth of the Bible. Characters get outside of time, they relate to nonhuman beings, they find a perfect love from which they cannot be snatched.

Tim Keller says it perfectly: “The Gospel of Jesus is the story that all the other joy-bringing, spell-casting, heart-shaping stories only point to. It is the one story that satisfies all these longings, yet is historically true. All those things that you long for most desperately are real and will come true. We will escape time and death. We will know love without parting, we will even communicate with nonhuman beings, and we will see evil defeated forever.” Joan Campbell’s own myth-weaving has led to an adventurous and intriguing fantasy trilogy. The Poison Tree Path Chronicles consists of Chains of Gwyndorr (winner of the 2017 Illumination Award), Heirs of Tirragyl and Guardian of Ajalon (releases 11 September 2018). Her short-story collection, Legends of the Loreteller, is a companion book to the trilogy and is available as a free download on subscription to her newsletter.