Don’t Let Them Squash Your Creativity

With all the roles that many of us have to fill throughout the day—friend, employee, spouse, parent, consumer, and so on—the creative self can be one of the most fragile. Even though for many of us the creative self is deeply embedded and even essential to our sanity, it is also easily crushed.

Many forces stand ready to squash the creative self. You no doubt have been struck by these enemies. Even the most successful people are prone to these creativity crushers. To name just one example, there are the naysayers. These are the people who tell you, either directly or in some other dismissive way, that you just can’t do it. You’re not good enough. Or you’re not as good as you used to be. Who do you think you are? Nobody asked for your creativity.

Growing up, I always felt vaguely embarrassed about wanting to be a writer. I feared that if I said too much about it, I was simply opening myself up to mockery. It felt so pretentious to want to write a novel. Who was I?

So I hid it. I wrote my first novel almost secretly. When I would go off to write, I would be vague with family and friends about what I was doing, telling them simply that I had work to do. In college, I was so paranoid about my roommates reading over my shoulder that I developed a secret coded language in which I could write when others were around, which I then had to decode later. 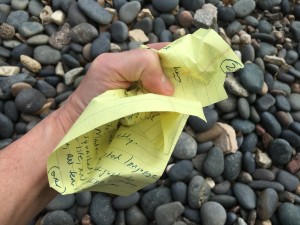 Today I am still tempted to let my creativity be squashed, not so much by naysayers, but by other enemies such as procrastination, the pressures of life, fear of rejection, weariness.

Yet the words, the ideas, keep bubbling up. When the ideas come, I think I have to write this. Why is no one else saying this? I find myself writing as fast as I can, letting the momentum carry me. In those great moments, the creativity blasts right through the doubts, tiredness, discouragement, and second-guessing. I write. I create.

This semester I am working with an outstanding group of writers in a course I am teaching in the new M.A. in English program at Azusa Pacific University. The theme of our course, which I write on the board every week, is What is possible for me as a writer?

Part of our work involves breaking down obstacles that discourage creativity. I will mention only two of them here, which stall many writers:

1. Nobody cares whether you create or not. The world is not asking for your work. Nobody is out there saying, “The world is a diminished place because you are sitting there not doing your writing.” If you don’t write, they won’t know or care. The world will go right on.

2. The market is already glutted. Mountains of work are already being rejected every day. So who needs you in there adding to that pile and struggling to compete?

Harsh, I know. I’m reluctant to even mention those things, but for many writers, it’s not as if these dark thoughts don’t already plague us fairly regularly.

So why keep writing?

Let’s look at that first obstacle. The world may not be asking for your work and may not think they need it, but the world in fact may be a diminished place without your writing. Think of your favorite author. Would your life be diminished if that writer had not written the books you love? Of course. For example, I love the novels of Thomas Wolfe and William Faulkner. Some of the most meaningful hours of my life have been spent with their words flowing through my head. The world would be a much shallower place if they had let obstacles to writing stand in their way, and for both of them, there were many obstacles.

You may or may not have the wide impact of those two writers, but picture one reader who reads your words at just the right moment, who is challenged, inspired, or entertained by exactly what you have to say. You have made the world richer for that reader, and perhaps many others, even people who haven’t been born yet. Write for those readers. It’s worth it.

As for the second obstacle, the glutted market, it’s true. Amazon boasts around 8 million books, more than the world needs for a lifetime. Online and print magazines, newspapers, website, blogs and other sources have an almost infinite number of articles, videos, lists, and other material available. There is no shortage.

And yet, as a reader, don’t you still find yourself searching for something new, something that fills a particular need that sometimes you can’t even articulate? Be the writer who writes that for someone else. Joseph Bentz is published in both fiction and non-fiction, with four novels and five non-fiction books. His novel Dreams of Caladria was published by Enclave in 2015. His most recent book, Nothing is Wasted, was published this year by Beacon Hill Press. He is currently at work on a book about passages of Scripture that have changed the world. He is a professor of English at Azusa Pacific University in Southern California, where he teaches courses in writing and American literature. His blog, Life of the Mind and Soul, can be found at www.josephbentz.com.