Here is another interview from over wherethemapends.com. Enjoy! 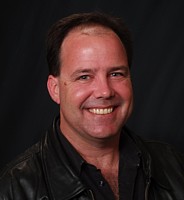 What a joy to have Christian speculative fiction author Marc Schooley as our interview guest this month here at WhereTheMapEnds.com.

In his own words, Marc is “the ‘not so much science, fiction writer who generally writes and reads nonfiction, so if I can do it, anyone can’ author of The Dark Man, and a man who values the Bible above all other books, and as the standard by which they all ought to be measured.”

Marc is one of three Christian novelists whose books comprise the second release list at Marcher Lord Press. Marc’s debut novel, The Dark Man, is hard to classify, but here’s a try. It’s a near-future psychological thriller in a dystopian America about a man on his own Damascas Road, who flies helicopter gunships and talks to a wooden block puzzle.

Weirded out yet? It sounds bizarre, and it is, but it is tremendous. The Dark Man was the first book I acquired for the second list at Marcher Lord Press. I was utterly engaged by the story, the writing, and the characters. (The Dark Man released April 1, 2009.)

He also works at a company in Houston that supports NASA, so the technology and landmarks in The Dark Man (a near-future thriller set in Houston) ring especially true.

Marc Schooley: I’ve been administering subcontracts for highly complex space flight hardware and systems for the Space Shuttle, International Space Station, and new Constellation program. It’s consumed a great deal of time lately, but it’s always worth it when a system you’ve had a part in functions well in space.

Also, when the new missions take off for Mars and the Moon, it’ll be an exciting time knowing I’ve been able to play a role in NASA mission success.

I have a great family, even though I’m demonstrably more normal* than them, and we try to spend as much time together as possible.

* I’m a fairly normal guy. Well, allow me to qualify that. I’m uber-normal in the context of my family, which regularly hosts normalcy contests. I’m the currently undefeated and reigning normalcy champion.

WhereTheMapEnds: O…kay. [grin] So, Marc, Mr. Normal, what is your favorite speculative novel of all time (Christian or secular) and why is that your favorite?

Marc Schooley: I am nearly a CS Lewis completist, and have a good and growing collection of older editions of all his works. I would categorize many of his works as speculative, although grounded with mere Christian doctrine. Some of my favorites are The Great Divorce, The Pilgrim’s Regress, the Perelandra space trilogy, Screwtape, and really anything he has written.

I admire his wit and use of metaphor, his ability to insert Christian doctrine seamlessly into any context, and his unabashed acceptance of Christianity in its full rigour.
Anything written by Poe works for me, and I suppose Hamlet and Macbeth qualify as speculative, with their ghosts and witches.

Now to embarrass myself: I love both John Carter of Mars and Tarzan. Why they haven’t filmed John Carter is beyond me. MS Quixote thinks that Stephen King is the premier fiction writer of our generation. [Editor’s note: MS Quixote is Marc’s mischievous alter ego.] I think he fancies himself chasing towers rather than windmills.

Marc Schooley: I wrote my Master’s thesis on the Problem of Evil (POE) as experienced through the eyes of two used car salesman (who better to discuss the POE, right?) transported to an allegorical underworld by the devil. There, they entered into a game of chess with the devil for their very lives, the pieces each representing, and subsequently ushering in, a facet of the POE.

It was great fun, and, in fact, an experience that spurred me to write The Dark Man. I am forever indebted to Professor Craig White, a.k.a. “the Captain,” my thesis advisor, who pushed me in the direction of writing fiction.

Marc Schooley: Of the only four people that I’m aware of who have read the book, or have more than a vague idea of what it’s about, the results are promising thus far. NOTE: we’re not sure yet if MS Quixote counts as a fifth, or is actually the author himself. More on this as the investigation unfolds.

Marc Schooley: To be honest, my favorite speculative genre is nonfiction, specifically relating to philosophy and theology. There’s a wealth of speculative material in both of these disciplines, and I believe they provide much speculative fiction with ideas. Interestingly, it’s probably a two-way street.

Take consciousness, for instance. It’s something we experience firsthand every day; yet it’s one of the most enigmatic and elusive phenomena known, and extremely problematic to define and describe philosophically with any degree of certainty. Thus, there’s a wealth of speculative material written regarding this subject.

Now, when you pick up a speculative novel, or any novel for that matter, you’re ushered, normatively (there’s that word again) into a foreign consciousness. It’s an art form that probes the meaning and feel of consciousness, and provides a medium with which to experience another’s thoughts immediately, if only vicariously.

Several of The Dark Man’s characters reveal a facsimile of their “stream of consciousness,” which is evaluated in the context of a Christian worldview. I hope you enjoy it. I know I did. And did I mention there’s plenty of bombs, and love, and stuff, in case that’s what you’d rather read about?

The same concept holds with regard to the greater questions in life: Who am I? Where did I come from? Where am I going? I believe speculative nonfiction and fiction both play a role in exploring these great questions, subordinate to Scripture, obviously, and often the arbitrary lines between the two disciplines are blurred to obscurity.

You’ll most certainly encounter these questions in The Dark Man, and you’ll connect with other’s thoughts and perceptions in relation to these questions and others, and hopefully your own conceptions will be honed through this interaction.

WhereTheMapEnds: Yikes, I feel like I’m earning a master’s degree myself, just listening to you! What do you think Christian speculative fiction writing and/or publishing will look like in three years? Five years? Ten years?

Marc Schooley: This is something that worries me. There’s always the temptation to desert the Christian faith for success. I think this is fairly common in Christian music these days, and I’d hate to see the same thing happen with Christian writing. I think writing is more insulated, as it’s less image-driven, than music, but the potential always exists for trouble, as with everything else in life.
This is not to say that anyone who writes a secular book is non-Christian, or that Christians should only write overtly Christian books. Far from it. It’s more like saying that we shouldn’t get to the point where we equate Jesus with Holden Caulfield, or approve of those who do.

All Christians, and especially Christians who are creative types, must stay grounded in Christ to maintain a good balance.

So, Marc, what advice would you give to someone who aspires to write and publish Christian speculative fiction?

Marc Schooley: Write for the audience of One, as defined in Tip #1 on wherethemapends.com, and have fun. Everything else is background noise.

Marc Schooley: Wherethemapends.com tips for writers, and the other books Jeff recommends there.

WhereTheMapEnds: [blushes] Thanks, Marc. (I promise, I didn’t put him up to that!) What’s the best part about writing and publishing Christian speculative fiction?

Marc Schooley: There are two things. The first is proclaiming the gospel and communicating the great truths of the Christian faith. If you’re a Christian, you know what I mean.If you’re not, you need to find out.
The second is the experience itself. If you’re writing, don’t miss out on this part, or exchange it for endless considerations about craft or marketing. The experience is what counts: getting to know your characters as if they were real people, sharing their thoughts and feelings, rooting for them or pulling against them.

WhereTheMapEnds:  What writing project(s) are you working on now?

Marc Schooley: The Ring of Nine—tentative title of the sequel to The Dark Man.

Mission Impolitical—tentative title of a nonfiction work about the church and its involvement in politics.

On Atheism—a novel with nonfiction commentary considering “the new atheism.”

Marc Schooley: You mean other than the Personifid Invasion, Summa Elvetica, and Hero, Second Class, right?

Orthodoxy, by GK Chesterton. It’s not a story, but it’s speculative in its own right. It’s work, but fruitful labor. I don’t know what took me so long to find it. Here’s a quote:

“Of necessary dogmas and a special creed I shall speak later. But that transcendentalism by which all men live has primarily the position of the sun in the sky. We are conscious of it as of a kind of splendid confusion; it is something both shining and shapeless, at once a blaze and a blur. But the circle of the moon is as clear and unmistakable, as recurrent and inevitable, as the circle of Euclid on a blackboard. For the moon is utterly reasonable; and the moon is the mother of lunatics and has given to them all her name.”

WhereTheMapEnds:  Wow. I’m not sure I know what any of it means, but it sounds good. 😛 So what else would you like to say to readers of WhereTheMapEnds?

“It is a trustworthy statement, deserving full acceptance, that Christ Jesus came into the world to save sinners, among whom I am foremost of all. Yet for this reason I found mercy, so that in me as the foremost, Jesus Christ might demonstrate His perfect patience as an example for those who would believe in Him for eternal life. Now to the King eternal, immortal, invisible, the only God, be honor and glory forever and ever. Amen”

Glad you’re one of us now, Marc. A big “thank you” for taking the time. You can visit Marc online here.