Welcome to another interview from over at wherethemapends.com. Enjoy! 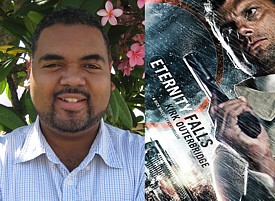 What a joy to have Christian speculative fiction novelist Kirk Outerbridge as our interview guest this month here at WhereTheMapEnds.

I first encountered Kirk when he hired me to do some editorial work on a novel he had titled The Miracle Treatment. I found it to be a wonderful and thoughtful near-future SF cyborg thriller mystery thing. Ah, the hybrids!.

Then Kirk joined The Anomaly forums, and I got to know him even better as Kouter.

From the beginning, I’d had Kirk’s book in mind as something to possibly publish through Marcher Lord Press. But when I found Marc Schooley‘s The Dark Man for the second list, I knew I couldn’t publish two gritty, near future noir technothrillers in the same season.

But when the third season rolled around—and after I did some editorial work on Kirk’s sequel—I knew I needed this guy in the MLP stable. His The Miracle Treatment became Eternity Falls and released in October 2009.

And with a name like Outerbridge, doesn’t he just have to love speculative fiction?

Kirk is a smart and generous guy. He lives in Bermuda (no, really) where he works as an engineer for the government.

Kirk developed a passion for storytelling at an early age. As a kid he read lots of fantasy and science fiction novels and comics. He played table-top role-playing games and watched endless hours of Japanese anime. Through all that he developed a keen sense for what made stories enjoyable and, more importantly, what didn’t.

He had always enjoyed writing, and he dabbled with short stories and such, but in college he decided to get serious, and he wrote his first novel. The result was 350,000 word monstrosity that took five years to compose. He realizes it will never be published, but it was not wasted time. It helped him hone his craft as a writer.

In 2002, Kirk dedicated his life to Christ and shifted gears. He could no longer write the stuff he used to write and thus stagnated for a bit. But after some soul searching and prayer he realized he couldn’t be like that one-talent man and decided to use his gift for writing and storytelling for God’s purposes.

And we’re so glad he did.

WhereTheMapEnds: Catch us up with you, Kirk. What have you been up to lately?

Kirk Outerbridge: I’ve been doing a lot of promotional work for my first novel, Eternity Falls, which is being published by Marcher Lord Press in October. I’ve been writing interviews, blogging, that sort of thing. It’s a very exciting time. I’ve also been hacking away at the sequel to Eternity Falls. I must say, after all the pressure to get my first novel polished up for publication, getting back to plain ol’ writing will be a treat!

Kirk Outerbridge: I don’t know if I have a favorite novel, per se, but a very significant one for me was Armor by John Steakly. That was the first novel I read that geared me toward sci-fi. Until that point I’d been purely into fantasy. Many parts of that novel are still vividly ingrained in my memory today. Plus, you just can’t beat futuristic soldiers in powered armor fighting giant alien ants!

WhereTheMapEnds: Then you’re going to love The Word Reclaimed by Steve Rzasa (also from Marcher Lord Press). No alien ants, but Martian six-legged ant-robots called hexamblers. And powered armor. You’re right, it’s a sweet combination. So, Kirk, what made you want to write Christian speculative fiction?

Kirk Outerbridge: I think I always wanted to write speculative fiction. That’s the gift God put in my heart. Ideally, I wanted to use my gift to honor God. And what better way than to use it as a means to edify those in Christ and educate and encourage those still yet to find Him?

Kirk Outerbridge: It was always a mixed response. Christians would love it, mostly. And non-Christians would say, “Pretty okay book. A little preachy for me, though.” Finding that balance of making a book that promotes gospel truths while remaining palatable to non-believers is like walking a tightrope, but I believe that’s the audience God has called me to minister to.

WhereTheMapEnds: I think you’ve done a good job of achieving that balance in Eternity Falls. What is your favorite speculative genre to read? To write? If they’re different, talk about that.

Kirk Outerbridge: It’s got to be cyberpunk for both. There’s just something about that mix of man-machine interface, dark dirty cities, and rage against injustice that sparks deep inside me. Then again, it could also be all the years of playing Cyberpunk 2020 as a kid <laughs>

WhereTheMapEnds: They probably go together. I was so impacted by my early D&D play that whenever I think about true fantasy adventure my mind always goes back to the Keep on the Borderlands. If you’ll notice, the Marcher Lord Press imagery and ideal is very much like Keep on the Borderlands. Okay, Kirk, so how would you characterize the current state of Christian speculative fiction writing and/or publishing?

Kirk Outerbridge: I think it’s an emerging market. The fanbase is small right now, but I believe with more big publishers taking risks and smaller indie ventures like Marcher Lord Press giving writers a chance, well-written books will get out there. Once they are, I think the market will be carved out of both the CBA fanbase and Christians in the ABA fanbase.

WhereTheMapEnds: May it be according to the words of your mouth. What have you seen that encourages you about Christian speculative writing and/or publishing?

Kirk Outerbridge: The quality of Christian speculative books is really getting up there with anything an ABA publisher can put out. When we start seeing that as a norm, I believe it will draw the churchgoing sci-fi and fantasy lovers to say, “Hey! There’s decent sci-fi and fantasy here. And it’s Christian! I’ll support this!”

WhereTheMapEnds: Again, may it be! What have you seen that discourages or frustrates you about Christian speculative fiction writing and/or publishing?

Kirk Outerbridge: The TONS of clone-like prairie romances I see the CBA churning out like there’s no tomorrow. That gives me little hope there will be any degree of success breaking into the mainstream CBA market. But anything is possible, I suppose..

WhereTheMapEnds: You didn’t mention the Amish books. Yikes. I’ve yet to find any publishers interested in my Amish Vampires in Space series. I’ve even designed the cover. 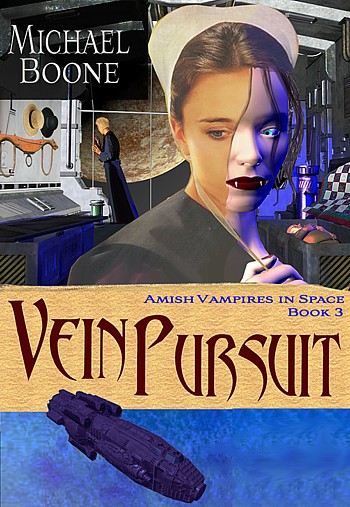 WhereTheMapEnds: [ahem] Anyway, Kirk, what would you like to see changed regarding Christian speculative fiction writing and/or publishing?

Kirk Outerbridge: I’d like to see the publishing industry actually getting involved with churches at the congregation level. One of the main reasons I wrote my book was to reach the college-aged fallen away. I believe if youth groups and young adult groups used these books as teaching mediums, I think it would spark interest in the industry and introduce books to a whole generation where books are taking the back seat to movies, videogames, and music.

Kirk Outerbridge: I think we’ll see more ventures like Marcher Lord Press gaining recognition in the publishing world through the use of Print on Demand. Somehow I see a kind of hybrid blend between POD and the brick and mortar bookstore. Not sure how it’d work, but as more and more publishers see the advantages of POD in reducing risk and increasing returns, I think it’s the bookstores that will have to find some way to adapt and provide POD books to walk-in customers.

Who knows, maybe Barnes and Nobles will team up with Kinkos and have a print on demand station in every bookstore. Walk in, order your book, go shop for an hour, and pick it up on the way out. Hmmm… Anyone know how to write a good business plan? <grins>

WhereTheMapEnds: You’d best hurry because others have thought of this too. The idea is to have one of these digital printing machines in the back room. The customer comes in and either names the book he wants or browses on a terminal until he finds the one he wants. Then he orders it, not unlike a cup of java, and the book gets printed and bound right there in the store. The trick is getting all the files and permissions for all those books. But it’s only a matter of time. So get that biz plan going!

Kirk Outerbridge: Write and keep writing. Learn and keep learning. Writing is both innate talent and learned craft. You can have great talent, but talent alone won’t get you much further than posting on the Internet. There’s a ton to learn about writing but, thankfully, there is lots of information out there to help..

Kirk Outerbridge: One of the best books I’ve come across is Jeff Gerke’s own The Art & Craft of Writing Christian Fiction. And no, he didn’t pay me to say that! I truly wish I would have had this book years ago to help me with my fiction. It focuses especially on Christian fiction, which has some special dos and don’ts. Besides that, it contains everything you need to know about writing as a craft and is set out in a very easy to understand manner. A must-have for anyone wishing to write Christian Sec Fic.

Kirk Outerbridge: The satisfaction of knowing that this somewhat selfish pastime you have, of writing stories that entertain mainly you, can in fact have the potential to impact someone’s life for Christ. I kind of think of it as using my creative powers for good!.

Probably the best part is holding the finished product in your hands for the first time.

WhereTheMapEnds: Because if you were to use them for evil, we would all run and hide. [grin] What writing project(s) are you working on now?

Kirk Outerbridge: Right now I’m busy on the sequel to Eternity Falls. I’ve been told a second novel is a lot harder to write than the first and I can attest to that. First time it was mostly wishing and waiting. Now, it’s, “Time to prove you’re not a one-hit wonder.” No pressure!

WhereTheMapEnds: Ah, I’ve already seen the first half at least of your sequel, and it’s terrific. No worries. What’s a cool speculative story idea you’ve had lately?

Kirk Outerbridge: I’ve been thinking about the plot for my third novel in the Rick Macey series. It’s still kind of fuzzy but it’d have something to do with genetically engineered cyber beings creating their own religion.

Kirk Outerbridge: Hands down, it’d have to be my fellow MLP author Kerry Nietz‘s Christian cyberpunk novel, A Star Curiously Singing. I can’t wait to read the entire thing.

Kirk Outerbridge: Keep supporting Christian speculative fiction. Only by selling more books can we keep the dream alive.That’s all for this time

What a great interview, huh? Thanks again to Kerry. Be sure to visit Kirk Outerbridge online.