Tagged In: Beyond the Summerland, Binding of the Blade, Christian Fantasy, L.B. Graham

Welcome to another speculative author interview here at Enclave Publishing. Today we have L. B. Graham with us. 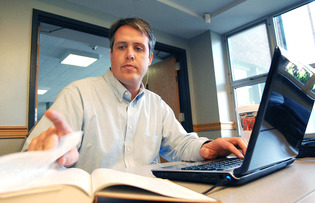 L. B. Graham is the author of The Binding of the Blade, a five book fantasy series, the first of which, Beyond the Summerland, was a Christy Finalist in 2005. He writes fantasy/sci-fi and contemporary adult fiction. He teaches Worldviews and serves as the Bible Department Chair at Westminster Christian Academy in St. Louis. More information about his published works and forthcoming titles can be found at lbgraham.com.

Now for the interview!

My older brother was a seminary student preaching at a small church in New Jersey, and he borrowed a sermon illustration he had heard me use. After the service, a member of the church – who happened to own P&R Publishing – asked him if he did any writing, in part because of the illustration. My brother told him he’d borrowed the illustration from me and that I did do some writing. They contacted me, asked me what I was working on, and that led eventually to my first contract and the publishing of The Binding of the Blade.

I loved reading as a child, and I also loved telling stories (by that I mean actual stories, not lies, though I suppose I told my fair share of those too…). It was fairly natural then, from an early age, for me to think about one day writing. As early as high school, I started signing lots of things with my initials instead of my name, since some of my favorite writers and poets signed things with their initials. So, I suppose you could say that I’ve wanted to write pretty much since I started reading. 3)  Tell us a little about your books.

It’s a good question. My first series, The Binding of the Blade, revolved around the theme of ‘longing for restoration.’ It imagines a world where the making of weapons represents ‘the Fall’ and where the ‘unmaking’ of weapons is a prelude to Restoration. As such, it wrestles a good bit with what it means to navigate a broken world while yearning for a perfect one.

My current fantasy series, The Wandering, (which began with The Darker Road last year and continues this Fall with The Lesser Sun) revolves around a very different theme than my first. Namely, that a world that rejects its Maker and puts its trust and hope in lesser things might find that for this rebellion, a price must be paid. So, it is kind of a judgement theme and pretty different then the restoration theme of BOTB.

One of my Indie books, The Raft, The River, and The Robot, is a slightly dystopic, futuristic novel inspired in large part by The Adventures of Huckleberry Finn. It wrestles with identity – much like the book that inspired it. How do we find and define ourselves, and to what extent do parents and social context shape us, both in that we are molded by them and in that we push away at times from them?

Having said all this, I hasten to add that the books are more interesting than this might make them sound. The plots of these books are too complicated to easily summarize here, while the theme is not. However, the theme is often under and behind the story, not up front in preachy ways (at least I hope not…)

I’ll roll this question and the ‘favorite book as a teen’ question into one. Like most Christian speculative authors, Lewis & Tolkien were both big influences, but Tolkien most of all. The completeness of LOTR still staggers me. I work hard to create worlds with real depth because he did, though admittedly, I know I don’t and won’t achieve his level of detail. I have tried to become a world-builder who constructs places where readers can stay a while and still feel like they’re discovering more things around the corner. I hope my stories and worlds will have some staying power as a result.

Primarily, I think of my audience as anyone who loves fantasy or good stories, not a particular age demographic. I know publishers don’t think this way, but I do. Most of my stories aren’t for little children, but I think any reader with a good vocabulary and some maturity might find some pleasure in my work.

6)  What is the one author, living or dead, who you would like to co-write a book with someday, and why?

Tolkien may have been a bigger influence in how I construct fantasy worlds, but my hero is C.S. Lewis. I would pick him in a heart-beat, not because I think I’d have something to add to any project we did together, but because, presumably, if we co-wrote a book, that would mean we’d get to hang out together – and I’d be all for that.

7) Describe your feelings when you opened the box and saw the first published copies of your very first book?

It was pretty awesome. A day long hoped for, to be sure. An aside, though, and I’m borrowing a little from Anne Lamott here – a lot of the days after that day are a let down. Just an FYI for aspiring writers. If we think getting published will fill the empty spaces inside, it doesn’t. Our books are released, we wait for the world to gasp in wonder, but little or nothing happens. That can be pretty disappointing. In short, it is a worthy goal, but keep it in perspective.

8) What are your hopes for your future as an author?

I want to get better, for my writing to improve, and hopefully, for the stories I create and the worlds I build to leave a lasting impression on those who read them, whether that be a large or small group of people. And, not meaning to be clichéd, but in all seriousness, I’d be contented to know that I had honored God with my talents through what I did, come what may.

9) What inspired you to write?

I said above that I was strongly influenced by Tolkien and Lewis. I also said that I thought about writing from an early age. Still, I didn’t actually try my hand at writing until I was almost thirty, in part because life is busy but also because I didn’t feel up to their standards.

I had several students who liked to read fantasy, though, and it kind of dawned on me as they talked and I listened, that Lewis and Tolkien were dead. Not terribly profound, sure, but if true (and it is, sadly), then those guys weren’t going to write any new stories for my students to read. If they were going to have other options from a Christian perspective, new authors were going to have to contribute them, and I think that realization spurred me on to try it myself and to free myself from the false expectation that I had to somehow be as good as they were or measure up to the standard they had set.

My next release is The Lesser Sun, it is the second book of my current series, The Wandering. I’m excited about it because one of my experiments in The Wandering was to create a world and story that was truly global. So, all the action doesn’t take place on a single, giant continent as it so often does in fantasy. The first book all took place in or near a single city, but in The Lesser Sun, the action spills much farther afield, and while that was challenging, it was fun to explore that larger palette.

Both. Clearly, any taco is a good taco.

Fall. Far and away my favorite. Love the leaves turning colors, love the crisp cool air, love everything about it.

Purple. It’s just a coincidence that my favorite football team, The Ravens, wear purple. Really, it is.

14) Do you listen to music while you write? If so what are some examples?

I usually do. Music is so good for setting the mood that it helps me find the right tone. For instance, I have a big playlist called “Melancholia” with my favorite sad songs in it, and I will go to that when I need to write a sad scene. It has lots of Peter Gabriel and Pink Floyd and songs that makes me feel, well, melancholy.

15) What is your favorite thing you have ever written?

This is very hard to answer. I’ll pick three. My favorite of the five books in my first series, The Binding of the Blade, was the last, called All My Holy Mountain. The last several chapters of that are probably my favorite of anything I’ve written. My futuristic Huck Finn story mentioned above, The Raft, The River, and The Robot is another favorite. And, I’m always pretty partial to the thing I’m currently working on, so I’d strongly recommend The Darker Road and The Wandering in general, as I think it does some unusual and inventive things as the story unfolds.