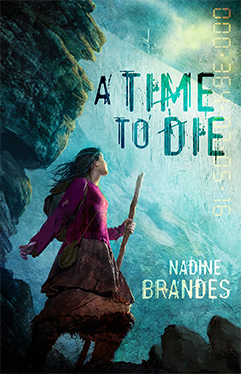 How would you live if you knew the day you'd die?

Parvin Blackwater believes she has wasted her life. At only seventeen, she has one year left according to the Clock by her bedside. In a last-ditch effort to make a difference, she tries to rescue Radicals from the government’s crooked justice system.

But when the authorities find out about her illegal activity, they cast her through the Wall — her people’s death sentence. What she finds on the other side about the world, about eternity, and about herself changes Parvin forever and might just save her people. But her clock is running out.

This is book one in the “Out of Time” trilogy. Nadine Brandes learned to write her alphabet with a fountain pen. In Kindergarten. Cool, huh? Maybe that’s what started her love for writing. She started journaling at age nine and thus began her habit of communicating via pen and paper more than spoken words. She never decided to become a writer. Her brain simply classified it as a necessity to life. Now she is a stay-at-home author, currently working on her dystopian series.

Other Books in "Out of Time" Out of Time book 3: A Time to Rise Out of Time book 2: A Time To Speak
Look Inside
Disclosure of Material Connection: Some of the links in the page above are "affiliate links." This means if you click on the link and purchase the item, I will receive an affiliate commission. I am disclosing this in accordance with the Federal Trade Commission's 16 CFR, Part 255: "Guides Concerning the Use of Endorsements and Testimonials in Advertising."