Order Now!
About the Book

An award-winning epic medieval fantasy tale about two teens who discover their ability to communicate with the minds of others.

Includes the complete Blood of Kings saga by Jill Williamson in one ebook volume.

Half of Er’Rets is locked beneath an impenetrable shroud. On the side that still sees the sun, two young people struggle to understand the mind-communication abilities thrust upon them.

It’s called bloodvoicing. Some say it’s a gift. One of the newly “gifted” wish it had never come.

Achan had been a slave all his life. Worse than a slave—a stray. He is consigned to the kitchens of a lord and forced to swallow a foul potion every day. When an enigmatic knight offers to train Achan for the Kingsguard, he readily accepts. But his new skills with the sword do not prepare him for the battle raging between the voices in his head.

Vrell Sparrow is not who she seems. She masquerades as a boy to avoid capture by the powerful forces that seek to exploit her. But Vrell feels called to help a young squire who recently discovered his bloodvoicing gift, even if doing so requires her to work with those who could destroy her.

While Achan learns to use his new ability, Vrell struggles to shut hers down. All the voices strive to learn Achan and Vrell’s true identities—and a different kind of voice is calling them both.

Toward a destination that is by darkness hid.

They have no choice. Chased by an evil prince, Achan, Vrell, and the Kingsguard knights flee into Darkness. They head north, for Tsaftown and Ice Island, where they must free an army that can help them fight for Er’Rets.

Darkness sickens Vrell. How long can she keep her secret without being caught? Achan already suspects her of lying. If she is not careful, he will suspect her of treason as well. She hopes he will let his suspicions go until they reach her home.

Achan wanted freedom, but this new journey has bound him more than ever. Sir Gavin’s claims are so far fetched. First, that there might only be one God, and second, that this God chose Achan to push back Darkness, the magnificent curse of Er’Rets. Him. Achan. Barely a man himself.

Each setback Darkness brings seems minor compared to the one choice only Achan can make. What will he choose?

Achan steps into his role as Crown Prince and prepares for war. But war against whom? Could Esek still be alive? Has Lord Nathak taken Esek’s place? Or is the mysterious Hadad the true enemy Achan must confront?

Vrell has her own agenda of serving Prince Oren as a healer, but when she is stormed and lost to the Veil, Achan does all he can to bring her back. His conversations with her are strange, though, as if she has no memory of who he is.

In a land consumed by Darkness, the fate of Er’Rets hangs in the balance as Achan endeavors to take the throne and end the reign of Darkness. 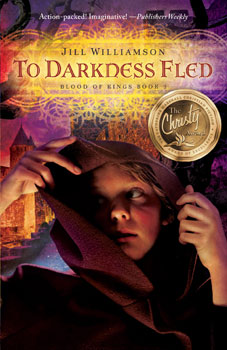